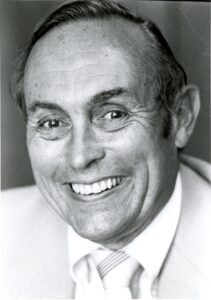 “The TCNJ community extends heartfelt condolences to Dr. Brower’s beloved wife, Dorothy, and the entire Brower family,” said TCNJ president Kathryn A. Foster. “I feel so fortunate to have had the opportunity to meet with him in his home in Arizona shortly before the pandemic. His interest and pride in the college were immense, and he kept close tabs on our progress. Simply put, Dr. Brower’s leadership and passion for TCNJ extended long past his time as president.”

Brower arrived at the college in 1962 as professor and chair of the Education Department, after having served as assistant superintendent of public schools in Plainfield, New Jersey.

He took the helm as interim chief executive in February 1970, then as president in 1971. He led the institution during a turbulent time in college, national, and world history.

Increasing faculty research, cutting enrollments, and increasing admissions standards highlighted his tenure. Brower also initiated the establishment of what is now the TCNJ Foundation. With his retirement on January 1, 1980, he concluded a decade-long presidency that positioned the college for future success.

Often called the “students’ president,” Brower was beloved by the campus community. The college’s student center, which opened in 1976, was named in his honor by a unanimous vote of the Board of Trustees in 1981, a year after his retirement.

“It is difficult to think of severing the many ties which have bound my interests, my labors, and my affections to this institution, particularly when so many exciting challenges have yet to be met and tackled,” said Brower in September 1979 during his final remarks to the faculty. “But I can consider surrendering my day-to-day involvement only because I believe deeply and firmly that your continued dedication to this great institution will ensure the bright future that we all expect and deserve.”

We hope we continue to make you proud, Dr. Brower.

For more on Dr. Brower’s life, or to leave a tribute message, visit Legacy.com. For those wishing to make a memorial donation, his family has suggested the Clayton and Dorothy Brower Scholarship Endowment c/o The Office of Development and Planned Giving, The College of New Jersey, P.O. Box 7718, Ewing, NJ 08628. Gifts may also be made online.